Having recently created a Pintrest, I’ve been collecting imagery in my head about how my dance should look and be structured. I’ve been looking at a lot of Dadaism (or anti art) and thinking about how that could translate into movement (or anti movement, whatever that means…). My darling mother loves to reference “The Lovers” by Rene Magritte, which is featured below:

Dadaism, or Dada was an art movement during the early 20th century. This art movement was an anti-war response that aimed at rejecting the norm and standards of art at that time. The Dada movement was an angry one. The people who fueled the movement were not only anti-war, but also radical left and anti-bourgeois. Dada came about in the form of visual art, theater, literature, poetry, theory and graphic design. There was not much of a response in the form of dance, which is interesting because a lot of Dada visual art portrays people, gestures and imagery. 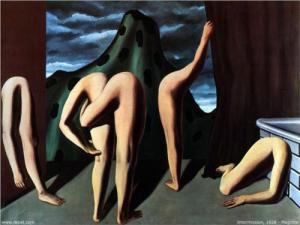 Rene Magritte (1989- 1967) was a Belgian artist who specialized in painting. His works are considered surrealism; they challenge the viewers idea of reality in art. A lot of his paintings are realistic until you realize that the things being portrayed would be impossible in real life. This sort of imagery is something that I would be interested in using in my own choreography by playing around with the ideas and imagery that Dada presents. However, I can understand why dance was not a prevalent form of response during the Dada movement because its surrealism; it’s hard to physically represent the unreal! How can one portray bodies of just one arm and one leg?! The challenge is enticing… 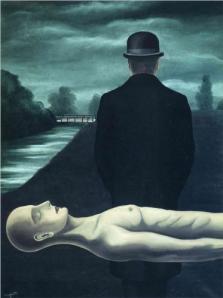 Rene Magritte, The Musings of The Solitary Walker 1926

Error: Twitter did not respond. Please wait a few minutes and refresh this page.