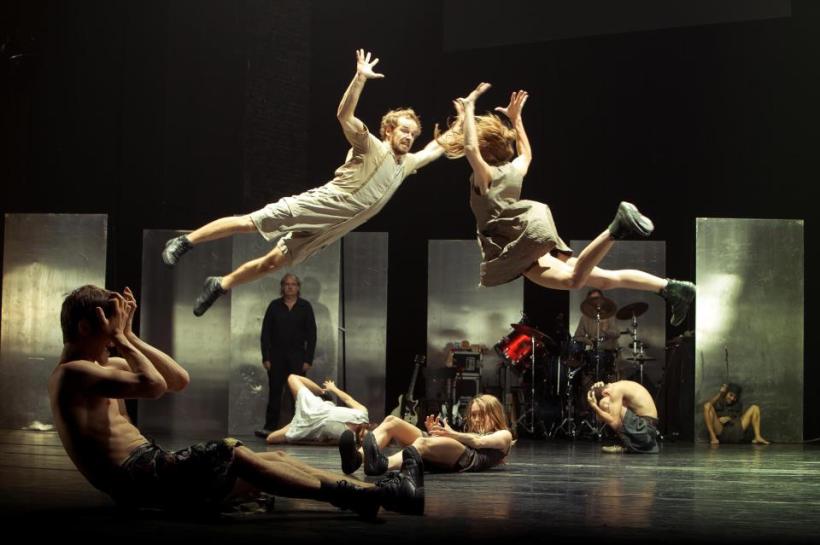 Born and raised a classical ballet and modern dancer, I had never really given physical theater a chance. That is until I saw Ultima Vez at Pace University on March 23rd, 2013. I went with a friend who had done some of Ultima Vez’s repertory while abroad, and he had really enjoyed it. While I was abroad in Australia, I was exposed to physical theater as a very serious art form as it is not very common or popular here in the U.S. I was talking to one of the graduating dancers about his future, and he told me that he had jobs in the physical theater world already set up for him upon graduating. It seems that physical theater is huge and widely recognized in almost all other parts of the world.

Ultima Vez is a physical dance theater company from Belgium. It was founded in 1986 by choreographer, director and filmmaker, Wim Vandekeybus. The piece I saw was called What the Body Does Not Remember, which premiered June 12th, 1987 in Toneelschuur, Haarlem (NL). Vandekeybus collaborated with composers Thierry de Mey (who, you may remember, also worked with Forsythe) and Peter Vermeersch. Ultima Vez, revived and toured the piece around the world, 25 years later with a new pickup cast.

Wim Vandekeybus says of What The Body Does Not Remember: “The intensity of moments when you don’t have a choice, when other things decide for you, like falling in love, or the second before the accident that has to happen; suddenly they appear, with no introduction, important for me because of their extremeness rather than for the significance to be given to them. The decision to use this as a basic material for a theatrical composition is at least a paradoxical challenge, considering a theatrical event as repeatable and controllable. Perhaps when all is said and done, the body doesn’t remember either and everything is a subtle illusion of lack which helps to define or exhaust the game.”

This piece is exciting and moving. There are genius moments of comedic relief. There are statements made about bodies and boundaries. The dancers are incredible and move with such authenticity and power. The women are just as strong as the men, and the dancers aren’t there to perform for an audience; the audience is merely viewing real people interacting with each other in very genuine ways. I don’t want to spoil anything!! All you need to know is that you want to see this company! I’m so inspired to create more than just dance movements within the frame of certain counts. I want to create physically challenging choreography that people who don’t or can’t dance will be able to relate to.

If you ever have the chance to see this amazing company, take the opportunity to do so!

Error: Twitter did not respond. Please wait a few minutes and refresh this page.